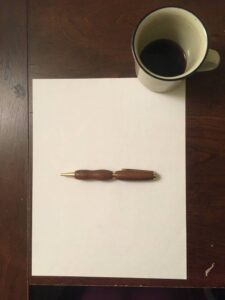 With seven months to go before Hanna’s Climb is released, it’s time (finally) to start learning to use this blog professionally. So here’s a start.

Five and a half years ago I was just going to write down some notes to help me remember the bedtime stories I was telling myself. A month later I had what I’d call a “sketch” of a novel, and sent it to a few close friends, who to my complete astonishment praised it effusively. And so not longer afterward I engaged a real writing coach to help me turn it into a real manuscript, still having no idea of what I wanted to do other than speak out for transgender women, and do it in a way that played to my strengths as a person who easily entertains many different perspectives at once.

That sentence (62 words—I had much longer ones!) shows just how much I had to learn first. German philosophers write that way; novelists don’t. Fast forward through three more coaches who worked with me on the entire manuscript, one editor (my German “culture checker”), and three manuscript assessment services, resulting in approximately 190,000 “track changes” entries: I had learned how to a) express emotion in my writing, and b) stay focused. Of course they taught me more than that: smoother transitions between paragraphs and scenes, where to put the dialog tags or indicators, and other mechanical details. But those two themes comprised the vast majority of the multiple margin comments on each of my 360-odd pages. And when the final top-notch manuscript assessment service returned it with an average of one suggested change per chapter, I realized I‘d accomplished something.

Even with publishing contract in hand, I continue to strive for unattainable perfection. It‘s an example of the law of diminishing returns: ever-increasing hours spent agonizing over a few words. Yet those few words not only sound better, but often lend vital dramatic emphasis to the themes of the novel. In a few cases I’ve cast a scene in a completely new light which far better serves its purpose. And as I see these highlights jump out like the peaks of a mountain range emerging from lifting clouds, I can see the craft of writing emerging in my brain. I’m no longer a novice.

So what have I really learned? First, that good writing doesn’t come quickly for me. I wouldn’t have gotten off the starting line without a word processor. (200,000 scratched-out words or phrases? Seriously?!) Second, that it’s worth the effort. It’s so rewarding to see the jumble of jagged-edged pieces turn into a seamless painting, with every little detail supporting every other.

I’ve learned about genre, and different audiences—no one can write for everybody. Mystery and suspense sells; there’s an innate hunger in all of us for it. But without heart, a mystery novel tends to resemble a long comic without the biting humor. Gone Girl has sold 20 million copies. I was unable to even find a mention of how many copies Sometimes A Great Notion sold, but it’s a whole lot fewer. Yet the latter is acknowledged by many to be not only a literary masterpiece but one that changed readers‘ lives. I doubt that many lives have been changed by a tedious yarn about two vacuous non-entities who surprise the reader mainly with their superficiality.

Where The Crawdads Sing gets the best of both sides: a bestseller (with suspense) that has heart, and inspired Taylor Swift to write a beautiful song for it. This is the kind of writing I aspire to. There is much more to say, but in order to actually get this blog published, I‘ll close for now with some quotes. First, from Notion:

“Viv looks past the child to the present, down at the photograph in her hand.

And most of all, Vivvy, that Someone, remember? He was to be Someone who wanted the real us, me, who wanted — truly—what, I am—was. Yes. Not a Someone who just wanted what they needed me to be…

But I won’t let her use me any longer. I love them but I cannot give myself for them. Not my whole self. I have no right to do that.”

And then from Hanna’s Climb:

“Twenty-three years ago, standing in front of a hospital mirror, she’d begun an argument. This isn’t the real me, she’d said, looking at her scars and ungainly figure. But this is the real me. A woman with a beauty of her own, and nothing to be ashamed of. And the world should know that.”

I’d totally forgotten Kesey’s words when I wrote this. But I guess part of me hadn’t.